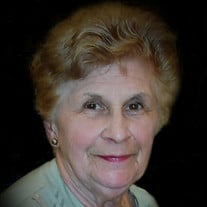 Highland Lakes - Anna “Mae” (nee Polowy) Schurko,” age 91, peacefully passed away on Thursday, January 16, 2020 at her daughter’s residence in the Barry Lakes section of Vernon. Born in Olyphant, Pennsylvania to the late Peter and Eva Polowy, Anna “Mae” graduated valedictorian of her class at the Olyphant High School. She attended Mansfield State Teachers College and was a graduate of Hahneman Hospital School of Nursing and a Summa cum Laude graduate of Jersey City State College, where she obtained her BA degree. Mrs. Schurko also received her certification in Gerontology from the College of St. Elizabeth. She had enlisted in the U.S. Cadet Nurse Corps during World War II when a national health care crisis was declared. Mrs. Schurko was dedicated to her family and friends, loved nature, animals, crafting and travel. She had been involved in many social and nursing activities and had been employed in New York, New Jersey and Florida hospitals. She held memberships in nursing associations related to the education of nursing students, educators, care of the elderly and rehabilitation. After her retirement from her 50 year nursing career, Mrs. Schurko became a member of the Hamburg Seniors and Red Hatters and held a three year period as President of the Hamburg Seniors. She had been a former member of St. Jude The Apostle Church in Hamburg. Besides her parents, Mrs. Schurko was predeceased by her brothers, Eugene Gerald Polowy and Michael Polowy She is survived by her daughters, Lynda A. Novak ( Greg), Jeanne M. Wieme, and Leesa M. Beckmann (John); and her grandchildren, Christina L. Ryerson, Brian Beckmann (Victoria), Vanessa Spray (Andy), Eric Novak (Deanna), Isobelle, Allison, and Oliver. Relatives and friends will be received on Thursday, January 23, 2020 from 4 p.m. to 7 p.m. at the Pinkel Funeral Home, 31 Bank Street (Route 23), Sussex. Mass of Christian Burial will be held at 12 noon on Friday, January 24, 2020 at St. Cyril and Methodius Ukranian Catholic Church, 13 N. River Street, Olyphant, PA 18447. Interment will follow at St. Cyril’s Cemetery in Peckville, PA. In lieu of flowers, the family requests that memorial donations may be made to the Missionaries of Charity, 344 E. 146th Street, Bronx, NY 10451 in memory of Mother Teresa. Online condolences may be offered to the family at www.pinkelfuneralhome.com

The family of Anna "Mae" Schurko created this Life Tributes page to make it easy to share your memories.

Send flowers to the Schurko family.