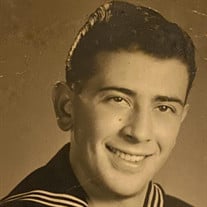 Wantage - Andrew J. Barbieri, age 81, passed away on Monday, January 13, 2020 at Newton Medical Center. Born in Passaic to the late Andrew Barbieri and Elsie “Nancy” Mastbeth, Andrew had lived in Woodridge before moving to Sussex County 60 years ago. He had served in the United States Navy during the Lebanon Conflict. Mr. Barbieri had been employed as a lineman for Sussex Rural Electric Cooperative for 33 years before his retirement. He was an avid hunter and horseman. Besides his parents, he was predeceased by his wife of 33 years, Phyllis and his sister, Joan Barbieri. Mr. Barbieri is survived by his daughter, Kathleen Neillands and her husband Richard of Port Jervis, New York; his son, Andrew J. Barbieri and his wife Nancy of Montague; and his four grandchildren, Chelsea, Joshua, Emily, and Luke. Funeral services will be held at 7 p.m. on Friday, January 17, 2020 at the Pinkel Funeral Home, 31 Bank Street (Route 23), Sussex. Friends may pay their respects to the family prior to the service from 4 p.m. to 7 p.m. at the funeral home. In lieu of flowers, the family requests that memorial donations may be made to The NRA Foundation, 11250 Waples Mill Road, Fairfax, VA 22030. (NRAFoundation.org) Online condolences may be offered to the family at www.pinkelfuneralhome.com

The family of Andrew J. Barbieri created this Life Tributes page to make it easy to share your memories.

Send flowers to the Barbieri family.