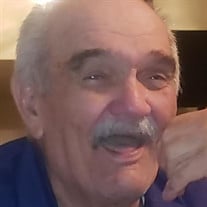 Hamburg -Alexander Lambert, age 91, passed away on Friday, August 7, 2020 at Hackettstown Medical Center. Born in Morristown, Mr. Lambert lived in Butler before moving to Sussex County, where he has lived for most of his life. He had served in the United States Army during the Korean War. He had been employed by Johnson Controls in Wayne for many years. After his retirement from Johnson Controls, Mr. Lambert worked at Perona Farms in Andover until February of this year. He was a member of the American Legion Post 132 of Franklin and attended Bingo every Tuesday and Friday at the Littell Center in Franklin. Mr. Lambert was predeceased by his wife, Dorothy (Kimble) Lambert on January 5, 1994; his daughter, Karen Lambert Fisher on March 19, 2015; his great grandson, Shawn Scribner on May 30, 2016; his brothers, David and Joseph Philhower; and his sister, Blanche VanOrden. He is survived by his three sons, Gerald Kimble and his significant other Rosemarie Piserchia of Brick, Kenneth Lambert and his wife Judith Crawn of Milford, PA, and Todd Lambert and his significant other, Miranda Rielley of Franklin; his daughter, Terri Lambert and her significant other Kenneth VanNatter of Sparta; 15 grandchildren; 25 great grandchildren; three great great grandchildren; his granddaughter and fiancé that cared for Alex and he resided with, Tabitha and Josue; and his former daughter-in-law, Patricia Morris of Wantage. Funeral services will be held at 12 noon on Tuesday, August 11, 2020 at the Pinkel Funeral Home, 31 Bank Street (Route 23), Sussex. Interment to follow at Sparta Presbyterian Methodist Cemetery. Friends may pay their respects to the family on Tuesday prior to the funeral service from 10 a.m. to 12 noon at the funeral home. Due to New Jersey government restrictions, all attendees are required to wear masks. In lieu of flowers, please consider a contribution in Alex's memory to the Franklin American Legion, 1 Legion Place, Franklin, NJ 07416. Online condolences may be offered to the family at www.pinkelfuneralhome.com

Hamburg -Alexander Lambert, age 91, passed away on Friday, August 7, 2020 at Hackettstown Medical Center. Born in Morristown, Mr. Lambert lived in Butler before moving to Sussex County, where he has lived for most of his life. He had served... View Obituary & Service Information

The family of Alexander Lambert created this Life Tributes page to make it easy to share your memories.

Send flowers to the Lambert family.