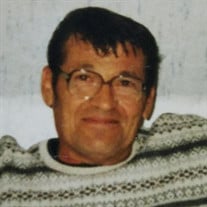 Glenwood - Albert M. Permunian, age 75, passed away on Thursday, January 12, 2017 at Orange Regional Medical Center in Middletown, New York. Born in Weilder Stadt, Germany, Mr. Permunian came to the United States in 1966 and has lived in the Glenwood section of Vernon for the past 43 years. He had been employed by Unimade Metals in Hillsdale for 33 years as a machinist and retired in 2014. Mr. Permunian was a member of St. Francis de Sales Church in Vernon. Albert never won the lottery, but was rich in the love of his family. Every story ever told about him ends in laughter. The world needs more men like Albert in it. It is a little bit darker without him in it. Mr. Permunian was predeceased by his mother, Luisa Permunian; his daughter, Ramona Permunian in 1973; and a brother, Fritz Permunian in 2016. He is survived by his wife of 55 years, Anna (Schwartz); his children, Adrian Permunian and his wife Myrna of Glenwood, Helmut Permunian and his wife Lisa of Hamburg, Frank Permunian and his wife Cathleen of Wantage, and Christine Rifflard and her husband Timothy of Glenwood; his sister, Marion Thea of Germany; and his five grandchildren, Albert, Paige, Alexis, Audrey, Sasha, and Tyler. Funeral services will be held at 7 p.m. on Monday, January 16, 2017 at the Pinkel Funeral Home, 31 Bank Street (Route 23), Sussex. Friends may pay their respects to the family on Monday before the service from 4 p.m. to 7 p.m. at the funeral home. Private cremation services will be held at the convenience of the family. Online condolences may be offered to the family at www.pinkelfuneralhome.com

The family of Albert Permunian created this Life Tributes page to make it easy to share your memories.

Send flowers to the Permunian family.